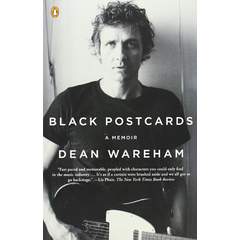 This memoir was a charming little blast from the past. It is the telling of Dean Wareham’s life – what formed his ideology, both politically and musically, and the events that shaped his career, starting in his teenage years in the 70s to the final days of his 90’s band Luna, which broke up in 2005. It is surprisingly detailed – I wasn’t expecting a rock star’s account of drug-tinged memories to be so thorough. Apparently he kept a diary. At times, he mentions specific quotes people said, how they said them, and where they were to create snippets of frozen moments, usually humorous ones – like when he recalls a conversation between Anthony Kiedis (Red Hot Chili Peppers) and his girlfriend in a hotel gym concerning buying workout equipment for their guest house.

The intimate tone of the book blossoms from the sometimes painful details Wareham shares. Besides the somewhat gory description of Galaxie 500’s breakup, Wareham also discloses blow-by-blow tellings of his affair with Luna’s bass player, Britta Phillips (his now wife), and a few other instances of infidelity to his first wife.

I originally bought the book for research into the music industry for my Ana Marie series (first book Call MeAna). I waited until the end of the book to youtube songs from the memoir – I’d never heard of Galaxie 500 or Luna. I really like their sound. In fact, I like it so much, I may have to write a scene to it. I was also pleasantly surprised there are some songs offered on Amazon Prime music.

A sample of music videos:

An interview with Dean Wareham:

https://www.youtube.com/watch?v=XEF6LU-074M – Be warned, there is political chatter for about the first 10 minutes.